Dr. Prystowsky is a practicing Cardiologist with St. Vincent Medical Group and Director of the Cardiac Arrhythmia Service, St. Vincent Hospital, Indianapolis.  He is also a Consulting Professor of Medicine at Duke University Medical Center. 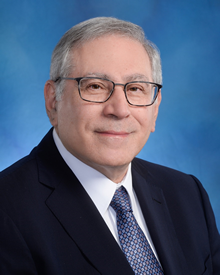 Dr. Prystowsky is a graduate of Pennsylvania State University and the Mt. Sinai School of Medicine.  He completed his internal medicine training at Mt. Sinai Hospital, New York City, and his training in cardiology and clinical electrophysiology at Duke University Medical Center, Durham, North Carolina.

From 1979 to 1986, Dr. Prystowsky was a full-time faculty member at the Indiana University School of Medicine, where he was Director of the Electrophysiology Laboratory.  In 1986, he returned to Duke University as Professor of Medicine and Director of the Cardiac Arrhythmia Center.  He joined St. Vincent in 1988.  In addition to co-authoring two textbooks, Cardiac Arrhythmias:  An Integrated Approach for the Clinician; and Clinical Electrophysiology Review, Dr. Prystowsky has also authored over 700 publications concerning cardiac arrhythmias.  He is the Editor-in-Chief of The Journal of Cardiovascular Electrophysiology and is also on the editorial board of 15 journals.