The Founders of the Heart Rhythm Society

Founders of the HRS

The founders of the Society established organizational leadership of a high caliber from the very beginning; introducing many prominent figures from the field of cardiac pacing and electrophysiology. Each president has been a driving force for the Society, supporting our mission and advancing clinical accomplishments in their respected field. 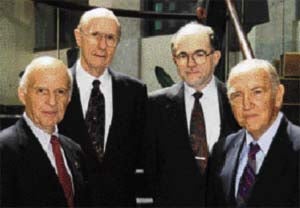 The founders of the Society established organizational leadership of a high caliber from the very beginning; introducing many prominent figures from the field of cardiac pacing and electrophysiology. Each president has been a driving force for the Society, supporting our mission and advancing clinical accomplishments in their respected field.

Since the Heart Rhythm Society's founding in 1979, the organization's leadership has dedicated itself to serving as a primary resource in science, education and advocacy for cardiac arrhythmia professionals and patients. The Society's founders, Doctors J. Warren Harthorne, Victor Parsonnet, Seymour Furman, and Dryden Morse, established the Society (originally named the North American Society of Pacing and Electrophysiology, or NASPE) after recognizing the need to distinguish cardiac pacing and electrophysiology from other areas of cardiology, both of which were barely addressed by other cardiology organizations.

The founding fathers of the Society established organizational leadership of a high caliber from the very beginning; introducing many prominent figures from the field of cardiac pacing and electrophysiology. Each president has been a driving force for the Society, supporting our mission and advancing clinical accomplishments in their respected field.

J. Warren Harthorne served as the Society's first and longest-acting president from 1979 -1981 and continued his commitment to the Society as its treasurer, chairman of its Membership Committee, editor-in-chief of NASPENews and has served on all of the Society's committees. In his words, "NASPE was founded through mutual friendships, an abiding desire not to fail or disappoint one another, a love of teaching, immense good fortune in the quality and devotion of its early administrative staff, and occasionally ribald humor."

Along with his dedication to making the Society possible, Dr. Harthorne has contributed a great deal to the pacing and electrophysiology community creating an esteemed reputation as an international expert in the field. In the 1970s he instituted one of the longest-lasting pacemaker training fellowships in the world at the Massachusetts General Hospital, directing the training of 30 cardiologists.

Seymour Furman became the second president of the Society from 1981-1982 and was an avid member until his death on February 20, 2006. As Dr. Furman recalled, "Carol [McGlinchey] organized the first [1979] NASPE Annual Scientific Session and I invited the attendees. We had the distinct pleasure of accomplishment and the realization that our colleagues were eager to attend and participate. The future opened up."

Furman's commitment to cardiac pacing and preserving its history resulted in the establishment of a variety of programs providing opportunities for those in the field. NASPExAM (now IBHRE) was founded in 1985 to raise the level of professionalism and academic credibility in cardiac pacing. The initial examination was created for physicians and surgeons. In 1989, a similar examination was developed for allied professionals. In 1997, a third examination in the specialty of cardiac electrophysiology for the allied professional was developed. He chaired this effort through 1998.

Dr. Furman founded an Oral History effort within NASPE which has continued to the present, collecting oral interviews, presenting a History Theater at the Annual Scientific Sessions and edited and operated a history website.

As a cardiac surgeon of the Montefiore Medical Center, Bronx, he devised the technique of transvenous, endocardial right ventricular pacing in 195), initially using a stimulating catheter electrode of his own design and in the same year arranged the earliest pacemaker clinics. Over the next 35+ years Furman changed the world of cardiac surgery and the arrhythmia field. He published widely and in 1970 he was a coauthor (with Doris Escher) of the first American book on cardiac pacing,Principles and Techniques of Cardiac Pacing.

The professional life of Dr. Furman displayed his passion for continuous learning and dedication to the cardiac pacing field. After his death in 2006, a fund was created in his name with the hopes of keeping his legacy alive by preserving the history of cardiac pacing, inspiring clinicians and students to further develop their careers, and educating the clinical and lay community about the field of heart rhythm management and treatment.

"I am amazed and delighted how a simple new idea for a Pacemaker Society has expanded to become such a vital part of the discipline of cardiology," remarked Victor Parsonnet, who held the organizational meeting for NASPE in his office at Beth Israel Hospital in 1978.

Dr. Parsonnet served as NASPE's twelfth president and was a long-standing member of the board of trustees. He is a cardiac surgeon and spent most of his career at the Newark-Beth Israel Medical Center where he assisted in organizing their first cardiac catheterization lab. He performed the first coronary bypass surgery in New Jersey as well as the first Cimino shunts for hemodialysis and the first renal and cardiac transplants.

With the assistance of Doctors Michael Bilitch and Seymour Furman, he created a national pulse-generator registry â a project supported by the Food and Drug Administration (FDA). These reports, later referred to as the Bilitch Report, were published for 20 years.

Dryden Morse, another founder of the Society, was a cardiac surgeon from New Jersey and contributed to cardiac pacing most intuitively. He was the first to associate the venous and arterial pulses, emphasizing the timing relationship of contraction of the various cardiac chambers. He investigated the irregular action of the heart, the action of digitalis, and studied atrial (then called auricular) fibrillation and distinguished between cardiac irregularity resulting from atrial fibrillation, and ventricular extra systoles.

Dr. Morse passed away January 18, 2002 at the age of 76 as a result of Parkinson's. Morse is little known to the pacing community due in part to his illness, but also his modesty and unwillingness to be in the spotlight. When forced to speak of himself, as in an oral history session, he repeatedly would shift the conversation to the interviewer's accomplishments rather than to dwell on his own. His strong-will and passion for the profession allowed him to stay in the cardiac pacing field longer than anticipated, however eventually his medical condition interfered with his professional life, and he was forced to cut back on work, public appearances, and societal activities.

In 1983, Morse published A Guide to Cardiac Pacemakers, which contained photographs and descriptions of all the then-available pulse generators and leads as a reference book for implanters and allied professionals. This work was updated with a second edition in 1986. For a number of years it remained an invaluable source of information to many in the cardiac pacing field.